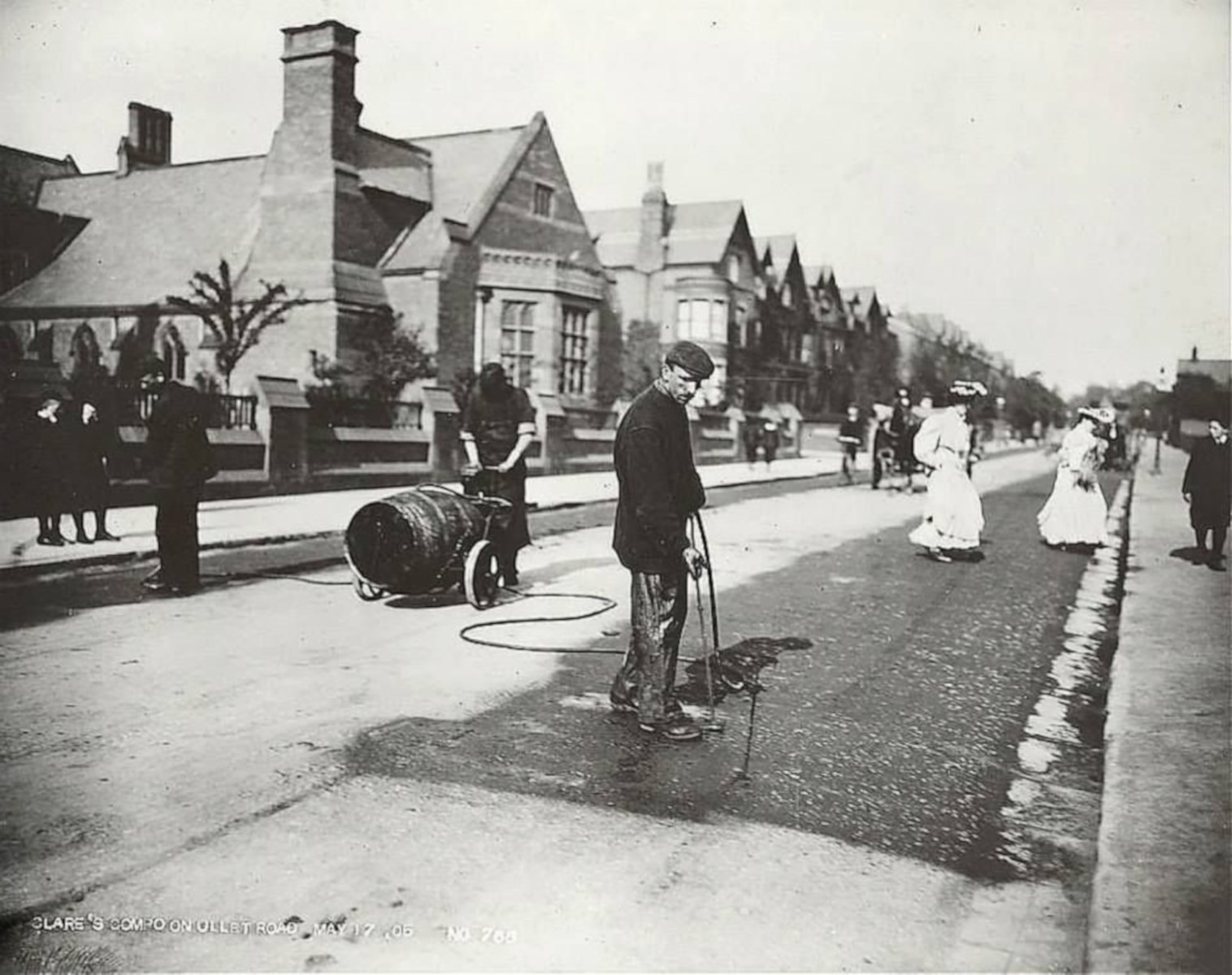 From the early 20th century Ullet Road Eco Offices, henceforth known as “Ully’s House” on this page, lies near the eastern edge of what was once a royal deer park. The area was already known as Toxteth (“Tokestath” in 1212), from the Old Norse “stochestede” meaniing “the place where Toki landed”. King John declared it a hunting park in 1204, and the remains of his Higher Lodge still exist inside a house halfway along Ullet Road. Toxteth was disparked in 1592 and by 1596 the then owner, Sir Richard Moyneux, had begun deforestation and split the land into farms though it remained heavily wooded well into the 17th century.

Ully doesn’t know how long Ullet Road has been in existence but certainly the topography of the land, with its many streams and in particular the “Great Marsh” to the north, would have made that trackway the most convenient for travel between King John’s lodge and the nearby village of Esmedune which gave its name to Smithdown Road. In this map from 1769 the line of Ullet Road, though un-named, is clearly visible. Ully’s House stands on the Meadow next to the Stack Yard. In the Census of 1841 there are 4 houses listed with the address “Ullet Lane”. Two are inhabited by agricultural labourers, one by a washerwoman, and the fourth by the Eagles family which included an artist and an engineer. In 1851 there are a few more inhabitants, but the big change appears in 1861 when the address has become “Ullet Road” and some of the families were wealthy enough to keep a footman and a lady’s maid. Now, many of the grand houses remain, mostly divided into flats. Ully doesn’t care (much) what the humans get up to so long as there are still enough trees and prey for him to earn his living and raise his young. Now and again you still hear owls at night …

The Doctor’s Surgery at 125 Ullet Road

125 Ullet Road was built in 1950 for a GP and his family on the site of houses destroyed during Liverpool’s ‘May Blitz’ in 1941.  It is located in an area known as ‘The Avenues’, built by Welsh builders in the late Victorian and Edwardian era as private housing following the opening of Sefton Park in 1872, and is situated within two of Liverpool’s 35 conservation areas . The area contains a number of listed buildings described in the website of the local residents group. As well as Liverpool’s docklands and city centre,  ‘the Avenues’ and ‘the Dales’ on the other side of Smithdown Road also suffered in World War 2, as Luftwaffe bombers crossed the area from Mossley Hill to attack the railway line at the edge of ‘the Dales’.  It is not known whether anyone from the original No.125 died in the bombing, but across the road at the junction of Ullet and Smithdown Roads, ten local residents were drowned by a burst water main as they sheltered in the basement of the local bank used during the Blitz as a field hospital.  The former bank is now occupied by ARW Property Solutions and Planet Yoga.

125 Ullet Road was extended twice as the doctor’s family and then the GP practice grew.  The family left and caretakers moved into the family accommodation upstairs.  In 1995, what by now had become the Sefton Park Medical Centre was relocated to the Smithdown Road Health Park created with the demolition of Sefton General Hospital.  It stayed as a health facility however and the whole building was used as offices by NHS Primary Care organisations, until PCT reorganisation caused them to move out in 2007.

Its final tenant before its development as the Ullet Road Eco Offices was New Pathways Children’s Services, since taken over by a larger organisation.

Until refurbishment in 2012-13 to create the Eco Offices, the main building remained relatively unchanged.   The original 1950 construction was traditional, with solid rather than cavity walls.  It also used Rea metal windows incorporating lead lights in the ‘Tudor’ style popular at the time.   A schedule of the original build is shown below.

We have tried hard to maintain the appearance whilst adding energy saving, tenant comfort and structural alterations to improve what previous tenants had described as a ‘cold and gloomy’ building.  The external wall insulation has been ornamented by brick slips matching the original brick features.   The panes of the lead lights are individually extracted and reset in new lead work, encapsulated into triple glazing units and housed in a thermally broken aluminium frame, literally incorporating the best of the old within the modern design imperatives of energy saving and comfort.  Three different thicknesses of glass are used to improve acoustic as well as thermal insulation on this main road site, with each thickness of glass reflecting back a different range of sound frequencies.

Certain features of the original building had to be sacrificed, however.   The beech woodblocks had to go to make way for the sub-floor insulation and the under-floor heating system, with attractive porcelain floor tiles on top to act as a more efficient heat diffuser.

All changes have been agreed with the City Council conservation department, who are as keen to preserve the original 1950s appearance in the Sefton Park conservation area as we are.